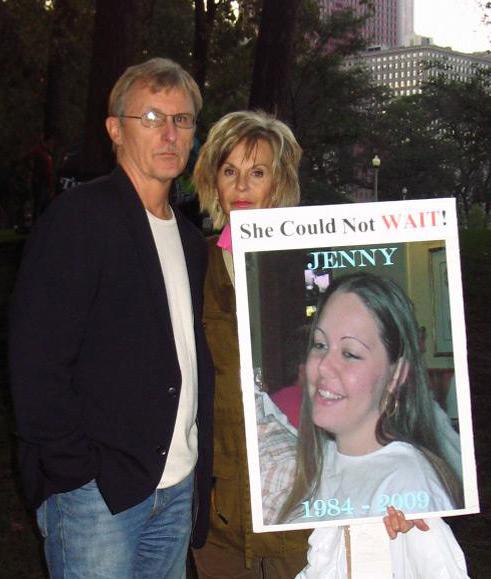 Midge and Dan hold a picture of daughter-in-law Jennifer at a public option health care vigil in Grant Park, Chicago.

Just one week after Jen's death in our deepest grief we went to a public option health care vigil in Grant Park. I carried a huge poster with Jen's picture on it entitled “She Could Not Wait” . My husband Dan was a speaker and bravely stood up on the hill to tell Jen's story. He almost made it through without breaking down but telling the story to the large group who listened attentively forced us to relive it all over again. It was painful to do but something we felt driven to do for Jen who is now silenced. We will carry her story to anyone who will listen to us so that other families do not have to suffer the loss that we have.

On August 26th at 2:30 pm we said goodbye to our beautiful 24 year-old daughter in-law, Jennifer. Sean, our son, was lying along side of her holding her in the hospital bed as he had many nights before. We stood at her side holding her hand and stroking her head whispering words that we hoped would sooth her. We watched the torturous action of the ventilator being turned off knowing it was final now and life was over for this young woman. She would never get to live her life, watch her daughter grow up or be with her husband again. The pain did not end there because now we must watch our son struggle, not able to accept this outcome. We are all struggling.

We would like to share Jen’s story with you and recount how she was tragically failed by our flawed healthcare system. Jen did not have health care insurance and, like millions of others, was faceless and voiceless in the richest county in the world. Jen became ill and what follows is her tragic demise. She was seven months pregnant, had a two year old daughter and a husband who was struggling to make a better life for all of them. Jen got sick and was finally admitted to the hospital on July 5th. We all stood vigil in the Intensive Care Unit for 55 days, 24/7 and even today it seems surreal that this could have happened. It didn’t have to happen, it should not have happened, and yet here we are grieving having watched a nightmare unfold before our eyes. The short answer to a long story is that it was all about profit and not about people, it could have been prevented. The horrific suffering that we witnessed this young woman go through must never happen to anyone else.

Jen and Sean moved to Indiana seeking to build a better life for their family in difficult times. They were there a very short time when Jen became ill. She was 7 months pregnant so when she complained of being tired and sleepy it seemed natural. It became clear on July 4th that it was something more than an expecting mother's fatigue. She was listless and had a cough and a fever. Jen did not have proper pre-natal care and was always struggling with clinics to see a doctor in an over-crowded system without health insurance. As a last resort, they went to the ER at a for-profit hospital. They were asked the standard questions and waited to be seen. After 4 hours, the doctor examined Jen, sent her for an x-ray and proclaimed that she had a cold, perhaps some bronchitis and sent her away with a prescription for an antibiotic and an inhaler. They did not consider that she was pregnant and a high risk.

The following morning at breakfast, Sean watched Jen as she seemed to be falling asleep sitting up and made a quick decision to once again go to an emergency room in a second hospital, this time a not-for-profit. Sean was nervous about being turned away, so he lied and said they had insurance but had forgotten the medical card. They examined Jen, did another x-ray and blood tests and this time the findings were far different from those less than 24 hours earlier. Jen had severe double pneumonia, sepsis and respiratory failure. She was admitted, and by that night she was in ICU on a ventilator with septic shock. Medical staff members spoke off the record saying there was no way Jen could have gotten this sick in 24 hours.

We were told there was little chance that she would ever wake up. Her lungs were badly damaged and they had induced a coma like state to help her reserve energy. Doctors and administrators talked about Jen at that point as if she were an incubator for the baby she was carrying. They had written her off as being too ill to ever recover. We begged to have her flown to a university hospital many times but were always told she would not survive the transport. We heard numbers like 20% and 5% chance for her survival and these numbers seemed to change with each new doctor we spoke to. She never had a CT to clearly define what was going on inside her body because the hospital did not have a portable ventilator to transport her for tests and she coded anytime she was moved without a ventilator. Most of her diagnosis was an “educated guess” to use the doctor’s words.

Jen went from one crisis to another the entire time we were there. She had a heart attack from blood clots and was being rushed to OR for a heart catherization. There was a team standing nearby to save the baby if Jen did not survive but the baby died on the way to the procedure. Jen survived the procedure but she was in very bad shape. The baby was left in uteri rather than being delivered because they felt she would not make it through a delivery. That changed over the next few days as the medical staff felt the sepsis infection was growing and they needed to induce labor. The baby was delivered quickly, a beautiful perfect little baby girl but stillborn. There was little time to mourn this loss because within hours Jen had a stroke from the stress on her body and was left paralyzed on her left side. She than had a brain bleed from the blood clots and once again we were told she would never wake up.

That began a discussion about removing her from the ventilator. There was pressure from the doctors and even talk about the enormous expense of keeping someone alive under these circumstances, but Sean begged for a few more days. He had not left her side and had become so protective of her that we worried about how he would be able to let go if it came to that. Minutes after that conversation that seemed to be the end, we walked into her hospital room to find Jen with her huge blue eyes wide open and looking around. Doctors were amazed and we felt as if we had witnessed a miracle and against all odds we had renewed hope.

We all rode the roller coaster from one day to the next, witnessing crisis after crisis. On good days Jen would put her lips up to be kissed, nod her head, roll her eyes when she thought something was funny, blink and mouth words. We clung to these moments and it was even more difficult because we knew she was in there and thinking. If she had not had brain activity maybe it would have been easier. Each time Jen came back from the brink the doctors would tell us it was her young age that allowed her to fight so hard but that her lungs were destroyed and would not get better.

Days turned into weeks and weeks turned into months. During this time we requested second opinions and struggled with staff to make sure Jen got her medications, was comfortable and was attended to. Since she did not have private insurance we were always battling for what we thought she needed. She had no voice and relied on the people who loved her to make sure she would be taken care of. We had great nurses, and nurses who acted like it was a burden to do the things needed to sustain her. We had doctors that were engaged and doctors who were arrogant and cold and we were all exhausted from nights of lying on a cot or sitting in a chair getting a few hours sleep. We ate hospital food and relied on vending machines but stood ever ready to take charge of the next battle whatever it was.

In Jen's last weeks, she developed severe pain in her abdomen that they were unable to explain to us since she had never had a CT. Sean had fought hard for them to get a portable ventilator over the weeks, something other hospitals had to transport seriously ill patients for tests. They got one the last week of her life but by then they would not move her without us signing papers to release them from liability. It was too late for our Jen, had they had it the first month it may have made a difference and now we will never know.

She had two collapsed lungs and two chest tubes inserted during the first month and now there were new perforations in her lungs which could not be repaired. The pain was so horrific for her and we cried at times watching her legs shaking and her eyes begging when nurses did not get to her quickly enough with medication. Yes, she was still aware, waking up and trying to talk to us, something we will never forget seeing.

The day came when Sean had to make a decision to remove her from the ventilator and we all agonized over this with him. It didn’t have to be like this, it should not have been like this!

In the richest county in the world our daughter in-law died, she died at the age of 24. We will never see her bright eyes again, her infectious smile, hear about her love for the color green, or watch her grow in her life. She didn’t have insurance, is that a crime in America??? Have we lost compassion for those who are less fortunate, and do we now condemn them to die if they can not buy private insurance? We hear about the enormous amounts of money it will cost for a public option but each day Jen was in ICU the cost was over $22,000. You do the math. She may have been alive today had we had a system that looks at everyone equally. If the first hospital had diagnosed her with double pneumonia instead of working within the limitations of cost restraints for the non-insured, a life may have been saved. Our family has always had private insurance but we have been very aware of those less fortunate and fought for their rights. Today we find ourselves sitting here having experienced first hand what is a reality to millions of Americans everyday.

Please don’t let there be another Jen! Please hold health care insurance companies accountable; please provide those who can not afford insurance with a way to be cared for other than emergency rooms. That is not the answer. It’s been forty years of fighting for change and the insurance industry still has a strangle hold on all of us and it’s stronger than ever. As a family who has suffered a great loss we are asking you to remember Jen before making the decision that things are good enough the way they are and that health care can once again wait...