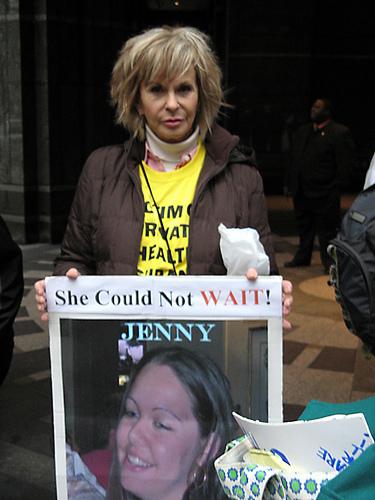 I woke up this morning and realized that today, October 26th , it has been two months since we lost Jenny. It feels like yesterday...

After I wrote Jenny’s story there were many nights when I would try to close my eyes and sleep and see Jenny’s suffering and it would play like a bad movie in my head over and over. I would see her at the worst moments and recall the horror of her fifty-five day struggle. I would see Sean holding her so that she would know she was not alone and I remember how much we all wanted to believe she would be ok and return home with us in time. Lately I have been trying to remember the good days, the happier days, but it’s difficult  because I am watching Sean who is still suffering now. For him, there has been little relief and I am unable to help him in his journey which as every mother knows is horribly painful to see.
This has affected my entire family and we are getting through this cruel loss in our own ways. We all have different coping mechanisms but we just keep moving forward.

Since the first candle light vigil that Dan and I attended in Grant Park, one week after Jenny died and where I stood holding Jenny’s sign with her picture on it while Dan spoke, I understood that this was a way to keep her memory alive and a way to push forward with a cause that would make a difference. I could take part in the fight for the pubic option and speak for the hundreds of thousands who had been silenced like Jenny from a broken health care system.

To say I am driven is an understatement. I belong to six action groups all fighting for the same thing and I attend every rally and event that I can. I have become a speaker for the cause and have done several videos telling the story. I have been in touch with Katie Couric from CBS news and countless others who are interested in Jenny’s story still I am always aware of the bigger picture which is letting Jenny be the face for so many who remain faceless and continue to suffer.

There are some rallies that stick in my mind where I have cried all the way through them while chanting “Big Insurance Profits”¦. while People are dying” but it’s what I am driven to do. I have met so many that are in need and listened to their stories and that moves me forward because there is still time for them. I want them to have the chance to live, I want them to get relief. If I can make one persons life count than I will have made a difference.

When I am asked to do a video or to appear on a show to tell the story I find that I have to control my anger because it shows and I try so hard to keep it buried. I am angry that Jenny died, because she could not afford health insurance, I am angry that the big insurance companies have a strangle hold over us and that the special interest groups and lobbyists continue to infiltrate our government and attach themselves to our politicians. I am angry that people are dying everyday while this debate is taking place...

I hear a lot of people talking about religion and Christianity yet I see blatant hypocritical behavior. I may be wrong but I think the meaning of religion is to take care of each other and to help the less fortunate and the poor. Why than are so many proclaiming their spiritual goodness still turning their backs on this issue? I can’t say that about everyone and I don’t mean to proclaim they are all hypocrites but there are far too many who are part of this “me first” mentality that has taken hold of this country and are in essence responsible for this very problem. What about the hate that’s out there for the sick and the poor? Why hate, why? It’s all been a learning process for me and has probably changed my view of the world forever.

I have met wonderful people working on the side of every American. They are too numerous to name but I can tell you they are 100% dedicated and work tirelessly as volunteers for the groups that are out there fighting everyday for the rights of others. They are from every walk of life and clearly understand how desperate this health care situation is. I applaud them and appreciate them everyday.

We can change this, all of us together one person at a time. Apathy is our biggest challenge in America.  I have learned to take myself out of my comfort zone and get involved and fight for what I believe in. There is not a day that goes by that I am not talking or writing to someone trying to bring about change. Everyone can do that, and it would make such a difference.

And to be honest there are those dark days when I just need to be alone. I am still trying to come to terms with seeing a 24 year old die when it did not have to happen and it was preventable. On those days I try to keep to myself and allow myself time to grieve. I am not sure how long this process takes. Each time I return from a rally, event etc. where I carry Jenny’s sign (pretty beatup now) I look at that young face and I tell her, “OK Jenny, we did one more today and we will keep going” . I can’t seem to stop running, pushing, driving, I need to keep moving until I feel that Jenny did not die in vain...