Zoe/Thanatos at the Hellenic Museum and Cultural Center 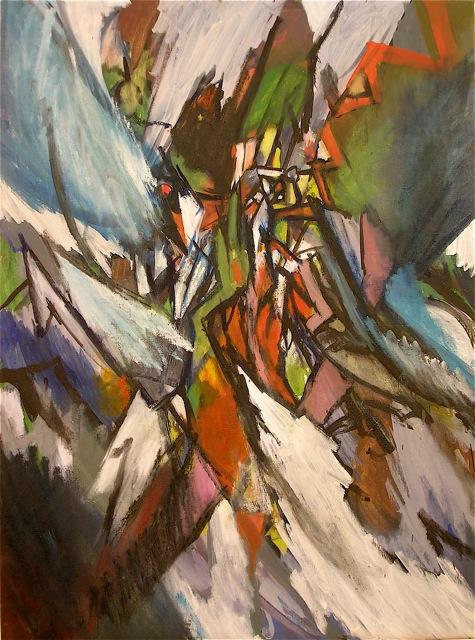 A group of women from the North Shore International Network had an audience Tuesday, May 19, 2009, with artist Diane Thodos to view her current exhibit Zoe/Thanatos (Life/Death) at the Hellenic Museum and Cultural Center at 801 West Adams, 4th floor, in Greektown in Chicago until August 23rd, 2009. Details of Diane's biography, exhibitions, papers, and artistic life can be seen on her website: www.dianethodos.com. The range of work represented in this exhibit included a linocut, woodcuts, etchings, oil on canvas, oil on linen, and oil on paper. Diane explained to us that her work is largely influence by German Expressionists whose work speaks to her in an intensely personal and passionate way.

Themes of some of the paintings first viewed were figures from Greek mythology, abstract expressions of Daphne, Nike, Medusa and Cassandra, as well as Demeter and Persephone, female archetypes loaded with layers of conscious and unconscious meaning and symbolism represented in oils on canvas. The interest in female archetypes is common to many women these days in understanding women's roles and it is similar to artist Ann Stewart Anderson profiled last month. In Diane Thodos' case, it is natural also because of her Greek background. Many of these feminist subjects were done in a style which resembled chalk drawings, done with oil on canvas, but also using a paint stick Diane explained.

A series of etchings, “War Cloud”, “The Destroyer”, “Fury”, “Chaos”, “Weeping Skull”, “Invasion” and “The Ancient Anguish” demonstrated the disturbing and disquieting effects of war. Diane explained that with each report of death and destruction in recent years, 9/11, and brutality and murder in Iraq, for instance, she was moved to produce works of art with the consistent theme of chaos, death and destruction.

The last images in the exhibit are black and white woodblock prints, single images of women in various stages of life ranging from suffering to liberating to intuitive and hiding. Examples can be seen in the catalogues at the links below.

If you are fortunate enough to be in Chicago, a visit to see this exhibit by Diane Thodos at The Hellenic Museum is well worth your time. The Greek Islands, right downstairs is a well-known Chicago restaurant to have lunch or dinner.

Rather than try and restate or reinterpret the motivation and meaning of the work of Diane Thodos, we thought it made more sense to put the links to the catalogues of two of her shows here so that readers are able to see examples of her work and essays, observations by the experts.

The catalogues contain essays by Victor M. Cassidy a journalist and art critic; Reinhold Heller, Professor of Art History and of Germanic Studies Emeritus at the University of Chicago; and Donald Kuspit, Professor of Art History and Philosophy at State University of New York at Stony Brook. Congratulations to Diane Thodos on her current exhibit and and thank you, Diane, for allowing us to present feature this amazing body of work at Women's International News.