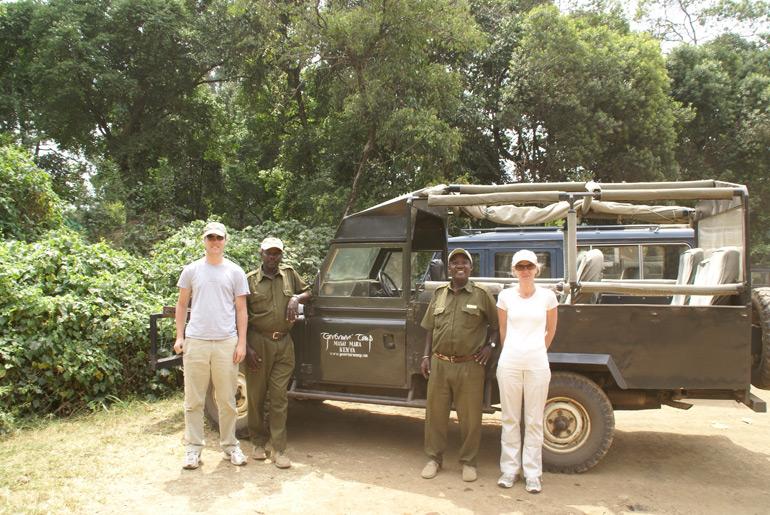 For as long as I can remember, I have wanted to go on a safari in Africa. My husband was not interested. Family moves, having children, and financial restraints, made it seem unlikely I would go until the year of 2007.

Early in 2007, as our son, Rory, was graduating from his English Boarding school that summer, I decided I wanted to do something special with him, to mark this milestone. I wondered how an 18 year old teenager would view a week away with his mother? I need not have worried, he was excited at the thought of seeing big game and he eagerly awaited the new adventure.

A contact in Nairobi, who owned a travel agency, put together an itinerary for me and I announced to my astonished husband, that I was booking and going, taking Rory with me! My Father had died a few years previously and he had spent time in Kenya with the British Army in the 1940's. He had spoken fondly of the experience,so this added to my wish to go -I knew he would approve.

July 2007 saw Rory and I on a flight to Nairobi, we had a one night stay there and then we flew on a small light aircraft, over shanty towns, across vast landscapes, to Amboseli. We saw Mount Kilimanjaro with cloud on its summit. We landed on a dusty, remote airstrip as elephant, wildebeest and zebra barely paid any attention to us. Rory and I were so excited to be here!

Tortillus Camp was a delightful surprise. Rory thought we would be camping rough, instead we had a luxury tent, it's roof was a straw hut, it's base was a wooden floor with a veranda. We had monkeys in the trees chattering about our arrival. We ate lunch at the main camp on a hill, overlooking a watering hole, visited by a herd of elephants. We were both overwhelmed by the scene playing out infront of us, it was so special.

Our first game drive was that afternoon and on this run we saw four lions and the amazing sight of a huge hippo in deep water. Rory and I took turns with the binoculars and camera. We had a scary encounter with a herd of elephants,who trumpeted us when we got too close in the Land Rover. Our driver knew what he was doing but we were scared!

Early morning starts, in the dark, became normal for us for the next few days. We saw sunrises and learnt to dress for the cold mornings, peeling off layers as the day wore on and the temperatures climbed. I have never known hunger as I did in Africa, Rory also, we attacked each meal they gave us like savages, and we were very well fed!

Each day brought new sights of animals, birds, reptiles and flowers, so there was much use of the camera. On our final evening in this camp, unbeknown to us,the camp staff had laid on a treat. Our driver took us up a steep hill to overlook the plains and watch the sunset over Mount Kilimanjaro. At the top of the hill, we were met with the sight of a small bar, with barman and snacks, with “Tusker” beer for Rory and a gin and tonic for me! The sun was beginning to sit low on the horizon and we had a few magical moments, taking photos and trying to memorise it all. Rory and I acknowledged to each other that this was going to be a defining memory we would never, ever forget. We were so pleased we had taken this trip, it was turning out to be so much more than we had hoped.

The following day we took a short flight to stay at Governor's Camp. The terrain was quite different, less dusty and more grassland, with trees along the Mara River. The sentry on the gate to the camp saluted us British Army style and gave us a broad grin. My Father would have loved it! Our tent was one of many pitched around the grounds, which followed the curves of the river. We were given strict instructions about being accompanied, at night, by a guard with a light and a gun. We later realised this was necessary as we saw hippo and elephant in the camp!

Our drivers here were knowledgeable and pleasant and as they drove us along the river,we were told this was where the film “Out of Africa” had been shot. We saw a very young giraffe with her parents, how elegant and graceful they were close up. Three lions were asleep in the grass. The male eventually woke up, yawned and gazed at us, not two yards away from us! I could hardly breathe for fear and excitement, Rory was the same! The lion was a magnificent specimen and clearly used to cameras and tourists.

Later that evening, four hippos appeared on the camp lawn, how they climbed up the bank of the river we never knew. We kept our distance from them, they are notoriously dangerous.

We set off early the next morning on another game drive and saw three hot air balloons in the distance. We were to experience a ride the next day, so it was wonderful to see and anticipate. That morning we also saw a leopard in tall grass, stalking a waterbuck. We eventually lost sight of them both. The BBC were filming for “Planet Earth” close by, so we watched as they filmed two lioness' hunting a warthog. They didn't work together and the warthog got away. I was relieved, Rory wasn't, as he wanted to see the kill-that's men for you!

The afternoon game drive brought us to a sleeping spot of Ridge's Pride, who were a pride of lions filmed by the BBC for their series “Big Cat Diary”. There were eleven lions, what a magnificent sight. We drove to the banks of the Mara River to a place often filmed, where the wildebeest make their annual crossing and hope not to be eaten by the crocodiles. A real National Geographic location and footage, we were impressed!

The following morning we were woken very early for our balloon flight. We had to travel to Little Governor's Camp, where we boarded a very small boat, in the dark, to cross the river. I tried to banish all thoughts of crocodiles in the water and Rory and I made it safely across.

We met with the pilot of our balloon and listened carefully to the instructions for boarding into the basket and for landing. The flight was wonderful, a totally new experience and we landed without mishap in the middle of the African bush, where a champagne breakfast had been laid out for us. Once again, we were starving and devoured all that was put in front of us, bacon, eggs and the lot!

All too soon it was our final night in the camp and as we ate dinner, we watched two bush babies eating papaya in a tree. We packed and knew we had one final game drive left in the morning, before our departure.

The best was left until last! Our guides had been told of a sighting of a cheetah, so we set out to find the elusive cat. Some hours of disappointment passed, several false sightings, and then we were rewarded. The cheetah was a female, fit and young, in the tall grass and she was hungry and hunting. We had binoculars and camera at the ready, we were so close! Rory's face was so wonderful, how could we have never experienced this in our lifetimes? The cheetah knew she was the center of attention and she rolled in the grass and performed for us. What a finale to our trip and we reluctantly agreed to return to the camp.

The emotions at leaving are hard to describe. Rory and I knew we would have these memories forever. Our light aircraft left the dusty airstrip, back to Nairobi and civilisation.

This trip was such a marker in my life. I spent a week with my son, at a time when his life was at a crossroads and he was maturing and moving away. I know my Father was looking down on us and smiling, his love of Africa had been handed on to his daughter and grandson.

Kenane McDonagh was born in England and spent her childhood years there. She met her husband while working in Hong Kong and they have been married for 25 years. Her husband's job has meant they have lived and worked in Asia, the Middle East and Europe. They currently live in Winnetka, Illinois.

As a footnote to her piece on Africa, her son, Rory, is now studying abroad in his second year of studying Business. She and her husband are travelling to South Africa this summer, partly on business but also to go on safari!