Looking Back, Moving Forward: A Retrospective 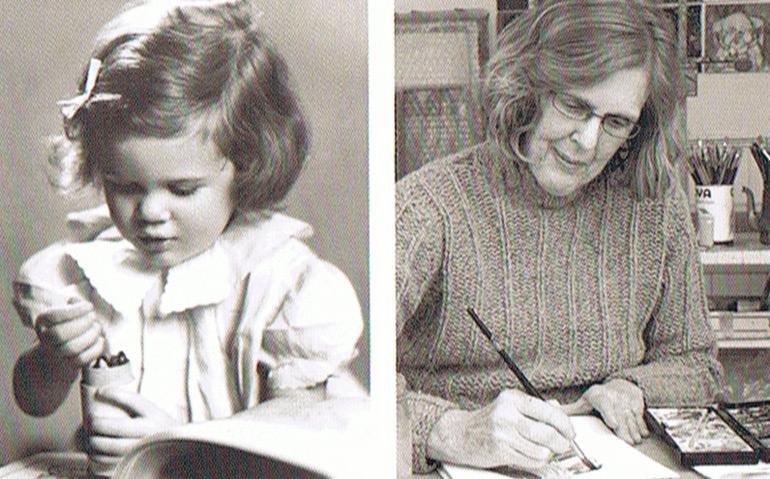 Anne Anderson then and now

Ann Stewart Anderson was born March 3, 1935 in Frankfort, Kentucky. Her childhood included a supportive, creative, nurturing, and loving extended family, including an artist mother, a Presbyterian minister father, and two sisters. As a child, while her mother, a graduate of Parson's School of Design painted, Ann painted alongside her and so Ann's career as a visual artist began. Her recent retrospective had examples of her earliest painted works, paper dolls clothes drawn in 1949 by her mother.

Everything about Ann's life was larger than life. In the 1970's, when I met her, she was working on enormous panels of paintings of the flowers in the garden outside at the Lincoln Park Conservatory on the near north side of Chicago. When her impressionist panels were displayed, a viewer had the sense of being in the middle of the garden in the midst of the flowers.

During the late 60's and early 70's while Ann was at the School of the Art Institute as the Dean of Students, her social conscience kept her involved in the issues of the day, whether it was protesting the murder of Fred Hampton, or the murder of students at Kent State. She was there with her students advocating for justice and she came by this sense of righteousness and justice honestly. The daughter of a conscience objector in WWI, her father, Reverend Olof Anderson, was a Presbyterian minister, loved by his congregation and nicknamed “Holy Oly” by those who knew him.

Ann's recent exhibit “Looking Back/Moving Forward at the Pyro Gallery, in Louisville, was a culmination and a celebration of sixty years of “art making” . Ann's work became more and more feminist until finally, a high school friend suggested to her in the mid-70's that she devote her time to painting women. Some of her work included techniques she learned of tranditional handwork, sewing, quilting and applique which prompted the labeling of this technique as “femmage” . The subjects of Ann's works are taken, in large part, from the experiences of her life and the lives of other women doing every day activities whether it is being a goddess or primping or lunching or other familiar pastimes of women. Feminist themes over the years included a 1966 series of ugly brides, challenging the idea that the wedding day is the happiest and most important day in a woman's life.

In 1973, after leading a group of students to study in Egypt, Ann returned home an Egyptologist and painted pictures of her parents, each in a sarcophagus surrounded by meaningful symbols of their lives.

In the 1970's she painted women in looking glasses and using mirrors at dressing tables; women lunching; and women in conversation, 1994 women in their private moments and activities.

”Demeter and Persephone” an “ultimately joyful expression of the mother-daughter bond” is raw and passionate. Greek mythology has inspired much of her work. “Ariadne's Labyrinth” is a patchwork of complex visual and narrative stories, more than two dozen images.

The series “MYTHIC WOMEN JUXTAPOSED” includes pairings of Marilyn (Monroe) and Aphrodite; Martha (Stewart) and Niobe; and Ruth (Justice Ginsberg) and Themis. These paintings, done in 200 and 2004 are oil an canvas and each measure 40” x 24” .

The Retrospective Catalogue ends with a shattering and mysterious 2009 painting of Odysseus.

Ann was awarded a B.A. from Wellesley College in 1957 and an M.A. from American University in 1960. She attended the Corcoran School of Art, the School of the Art Institute of Chicago, University of Wisconsin, Arrowmont School of Arts and Crafts and the Anderson Ranch Art Center in Colorado. In the late 1950s, she worked at the Corcoran Gallery of Art. She taught art in the Montgomery County, Maryland schools until 1964 when she became Dean of Students and Assistant Professor at the School of the Art Institute of Chicago. Later, Ann moved back to Kentucky in 1975 to become Artist-in-Residence at Louisville's St. Francis High School from 1977 to 1991. The following seven years she served as Executive Director for the Kentucky Foundation for Women. She is a contemporary working artist currently living in Louisville, Kentucky. Enjoy Ann's website with additional paintings and contact information at: www.annstewartanderson.com.