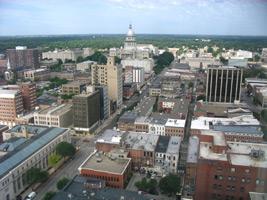 Springfield, Illinois, was a quiet place the week of July 27th through August 8th. Just two weeks before I had observed protests in the Capital Rotunda against the budget cuts affecting children in the state of Illinois. The public servants of the beleaguered state of Illinois had adjourned until October 14th. Not a bad gig if you can get it. But while politicians vacationed, only blocks away from the State Capitol Building, in the Prairie Capital Convention Center was the site of serious business, a world tournament played out quietly. Most contestants played fifteen 40-shoe games over three days. Each player provided mandatory pre-game maintenance to the court. Four warm up horseshoes were permitted down and back before play. No alcohol or tobacco is allowed at these events and no carry-ins either. Pitchers wear a shirt with their name and state or province on it. Pitching is done with great precision and competence much to the delight and pride of the 1330 people who signed up to compete, including 192 women participating.

After being asked personally by Josh Feger of the Springfield Convention & Tourism Bureau to hold the tournament in Springfield, Feger had to assure Tournament Committee Chairman Bill Marvin that there would be a facility that could have the necessary 21 lighted courts. Once that requirement was met, The National Horseshoe Pitchers Association, the official organization for the sport of horseshoe pitching, chose Springfield as the site for its competition marking the 100th Anniversary of the World Horseshoe Pitching Tournament which first began in Bronson, Kansas in 1910. Participants converged from all over the country and the world.

Invited to this tournament by a man and his wife who got off the elevator with me at the Hilton, I left to watch the tournament the next day and never saw the couple again. In my room, I examined the Springfield map to find where the convention center was and couldn't find it. As I looked out from the window of my room on the twentieth floor, there it was down below and across the street looking a lot like a giant takeout carton.

The next day, as I walked across the street to the Center, I found myself reminiscing about all my uncles and great uncles pitching horseshoes on the banks of the Fox River in Yorkville, Illinois. They loved it! I remember the clanking and the talking, the serious sport of it and the relaxed feeling of summer weekends. I couldn't wait to see what the World Tournament would be like.

A basic story about Horseshoes can be found on Wikipedia. It includes the average lay person's impression “an outdoor game played between two people or two teams of people, using four horseshoes and two stakes” . There is speculation that it is related to discuss throwing and speculation that it may date back to the original Olympic games in Greece and Rome, but the origin is vague. In 1869, rules were set in England to govern the game.

What I saw at the Championship and what I saw as a child were vastly different, of course. This was indoors and that was outside. In a competition the set up more like bowling lanes. One next to another. No one seeming to have any distraction from there being another court right next to them. It's quiet except for the continual clanking of the horsehoe hitting the stake. Dress is casual and ranges from more casual to more Land's End or L.L.Bean.

I remember sand at the stake when my relatives were in play but in competition, there is no sand around the stake, it is clay. When the horseshoe falls, it stays put in the clay with a thud. People just wear gym shoes, no specialty shoes for this sport.

When you walk into a place as a spectator and/or you walk in as a reporter, there is a big difference. I walked in as a spectator and suddenly knew I had to do a story. When I started asking questions, the first person I talked to was Gloria Smith from Milltown, Wisconsin. Gloria is the whole reason that the story developed. She is the epitome of a clean-cut Wisconsin woman if there ever was one, possessing that quintessentially warm Midwestern sensibility and hospitality. Gloria answered my every question and, if she didn't know, she set out to find the answer and made numerous introductions for me. I had to press her to talk about her own experience because she kept volunteering other people as examples of the sport.

Gloria got involved when her friends asked her to play. She was reluctant initially and then her husband built a pit in her backyard and she started to practice. The group was a start-up team and so they all progressed together. She took up the sport in 1980, started in some home tournaments and then her first World Tournament in 1987. She missed '88 but except for that one, she has been playing ever since. Now, Gloria is 80 years old. The one overwhelming impression of this crowd and Gloria is a prime example, is that they are a most All-American group, old-fashioned salt of the earth people, quietly doing their personal sportsman-like best.

In 1987, Mary Denzin from Minnesota joined her husband who needed a partner. So at age 49, she began pitching and in her third year, she reached the top 12 and pitched about 50% ringers.

Sue Helene has been out of the tournament for a few years but still faithfully follows and is involved in the sport. She described the four main ways the shoe (horseshoe) travels. The majority of women pitch a flip shoe. That is it starts out in one direction and flips. There is a “turn shoe” , the horseshoe turns ¾ horizontally, or even 1¼ turn shoe. There is a reverse 1¼ and there is a reverse ¾ . But this is just an inkling of how detailed the sport is when you are really involved in it.

This IS serious business. Horseshoes are inspected for weight and size. Besides the “pit” , there is an Inning, a Pacer, a Leaner, and a Legal Shoe (not the one you wear, the one you throw). To learn the rules of the game, there is The Official Playing Rules, Guidelines and Specifications for the Sport of Horseshoe Pitching, The RGS Book, Adopted July 16, 2006. It can be obtained through the national Horseshoe Pitchers Association, www.horseshoepitching.com . Dick Hansen in Fransville Wisconsin is the NHPA Secretary Treasurer and he is the one recommended to call for more information: 1.262.835.9108

Proud of the accomplishments of their members, Gloria and the ladies I speak to relate that a couple got married who met through horseshoe pitching, Amy Francis and Al Francis. Al Francis, 40, also just happens to be fourteen times the World Champion. Sue Snyder, they say, at the most misses only about 1½ rings out of ten shoes, that's an 86.62% average. Senior Rivers Prewett from North Carolina averages 86%. Edith McKinney who began pitching in 1980, at age 70 now, pitched in Class D, 54%.

And talk about ringers, one is taken aback for a second look when suddenly you wonder if you are seeing double when your eyes spot the standout mirror twins, one pitching left-handed and one pitching right-handed. They are Marlene Ray and Maxine Griffith of Tennessee. Marlene with an 83% average and Maxine with a 76% average.

If you still want to learn more, then you can meet that need by traveling two hours from Springfield to the National Horseshoe Pitchers Hall of Fame & Museum in Wentzville, Missouri, where there are sixteen indoor climate controlled courts. Don't be surprised if you start entertaining the idea of building a “pit” , the enthusiasm is contagious and the investment is minimal.

Thank you to Ernie Bowdell at Bowdell Photography for all of the pictures of the horseshoe pitchers.