The Honorable Dandelion - an International Phenomenon 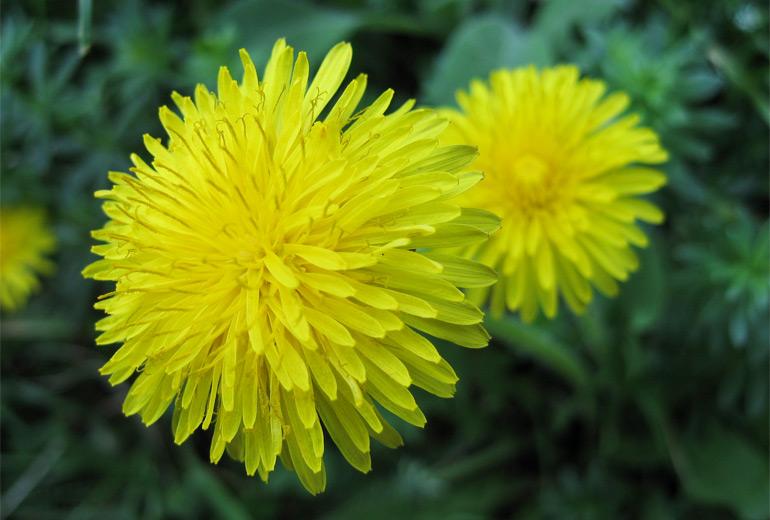 Scientific Name: Taraxacum officinale
Family: Asteraceae
Other names: Blowball, Cankerwort, Devil's Milkwort, Clockflower, Irish Daisy, Lion's Tooth, Milk Witch, Monk's Head, Priest's Crown, Wild Endive and Horse Lettuce. According to one book, Michael Castleman's “The Healing Herbs The Ultimate Guide to the Curative Power of Nature's Medicines”, “By the 17th Century, dandelion was so well known as a diuretic, the English called it Piss-a-bed, from the French pissenlit. There is an endless amount of information about dandelions both on the internet and in most guides on herbs, flowers and weeds. We thought we would start our first issue with an plant that exists all over the world.

Dandelion, a perennial with long, narrow, saw-toothed leaves, hence the name “teeth of the lion”, is said to be related to asters and sunflowers, marigolds and daisies.

The first flower familiar to many children around the world is the irresistibly yellow dandelion. Often examined closely by children, it leaves a yellow pollen shadow on those who lift it up under the chin. It often makes up the first bouquet children give to their mothers. It is the first flower most children ever weave together to make a ring or a crown. As the bright yellow flower goes to seed, many a wish is made on it's fluffy down like transporters which carry the seeds aloft for dispersal. The hearty dandelion grows all over the world. It is cultivated in France and Germany which gives testimony to the notion that a weed is just a plant growing in the wrong place.

Dandelion Tea is considered to have curative powers. Castleman's guide lists it as having properties helpful to premenstrual syndrome, weight loss, congestive heart failure, cancer prevention, yeast infection, digestion, and diabetes. Before you make a tea with dandelion leaves or put the leaves in a salad, read everything you can about the properties attributed to dandelions, both positive and negative. Pregnant women should not consume dandelion since it is a diuretic. There is some information at the links cited below. Always take caution when introducing any new substance into your system. Dandelion is considered to act as a diuretic and to have a laxative effect and it could potentially be toxic to some people because of its high concentration of potassium and magnesium, a good thing on the one hand but a factor that causes some people problems.

If and when you do your homework and you are satisfied that you can try dandelion tea, here's how. Take five or six leaves. First of all, It is important to make sure the dandelion is growing in an area free from pesticides and contaminants. Leaves harvested before the first bud arrives will be less bitter. Later, the leaves can still be used but they become more bitter. Remove the stems, rinse, and put the leaves in a cup. Add boiling water and let the leaves steep for five to ten minutes. Strain and add honey if desired.

The leaves can also be used in salads or steamed like spinach. The large taproot of the dandelion is sometimes dried, ground, and used as a coffee substitute. All herbs, like all prescription medicines should be used with caution and attention to their affects. See gardensblaze.com for a more information on the medicinal uses of dandelions, more nutritional information, and also for a recipe for Dandelion Wine and Dandelion Scrambled Eggs. More information and another recipe for Dandelion Wine can be found here.

which also lists all of the B vitamins, and others, in the nutritious dandelion said to have more beta- carotene than carrots. On the website www.thregreengrassgrows.blogspot.com there are specific facts about the nutritional content of a dandelion salad.

When It Comes to Herbal Teas and Remedies, Use the Pre-Cautionary Principle - First Do No Harm
Since we each have our own biochemical individuality, it is essential to know our bodies and their sensitivities. For instance, while many people get comfort from chamomile, some people with sensitivity or allergies to ragweed are also sensitive to chamomile and don't tolerate it well. The same is true with echinacea, some people exhibit sensitivity, as common as its use is. We know a woman who had a severe reaction to anise hyssop, swollen face and all. It took several episodes of this allergic reaction to make the connection that it was caused by the anise hyssop plant which makes a nice tea. We also know a woman who harvested mushrooms for her morning omelet and ended up having a liver transplant as a result of inadvertently harvesting an unknown variety. While a mushroom is not an herb, the crisis demonstrates how the properties of organic things we eat can sometimes be unknown to us and the effect can be a catastrophe.

Knowing herbs and their potential for help or harm is a highly specialized field. A well-educated, experienced health food provider or alternative healer can be an invaluable resource. Still, each body has its unique biochemical make-up. Several years ago, a local woman had a disastrous outcome from drinking chaparral tea described at this link from the University of Chicago Medical Center. Chaparral is said to have been used for many curative purposes by Native Americans including as a remedy for cancer where some people have shown improvement with its use. At the same time, it puts people at risk of liver and kidney problems. If you look around the web, there are accounts of a sixty year old woman and a twenty-seven year old male who, after using chaparral, developed hepatitis. True, these are anecdotal but the account at the link from the U of C above of a woman who required a liver transplant after regular use of chaparral tea is not. So, be cautious using all herbs as you would prescription medications, make inquiries to the best specialists you know, read up, and take it slowly when using them.